Recent discoveries of early Technicolor, such as those outlined by Bryony Dixon for the BFI National Archive [I], offer glimpses of the additive colour image: a distinctive and memorable photographic style, that I would suggest summons visions of past cinematic exoticism, simultaneously real and unreal. Although the work of the Technicolor company was  highly influential in the  production of ‘sound-and-colour’ film in the 1920s and 30s, it was not the only process available, as Sarah Street usefully reminds us through Colour Films in Britain(2012).  Although the lack of extant footage makes it challenging to envisage the appearance of alternate processes, the press of the day can furnish us with contemporary information and better understanding.  This research focuses on three particular examples of additive colour photography and the inventor, Doctor Anthony Bernardi.  Its results have allowed me to build on Street’s insights and in so doing, other mysteries have come to light.

The first of the three systems that I will focus on is ‘Raycol’, the invention of which was initially attributed to Bernardi, an Austrian who had moved to the UK seeking investors in April 1926.[ii] Descriptions of Raycol appeared, circa 1929, in The British Journal of Photography:

…a two-colour cine-film is taken in the usual way by successive exposures through red and bluish green filters, but is projected without the corresponding alteration of red and blue-green light in the projector. The images resulting from the red-filter exposures are projected in the normal way with red light, but the images representing the blue-green components are projected by white light, as black-and-white [sic] images on the screen. […] the resulting picture is seen not in orange light only, but in a range of natural colours extending more or less throughout the spectrum.[iii]

In some ways, Raycol may be considered a different variant of Technicolor.  With red tones strongly fixed, other hues came from light distortions – an appealing, if not remotely accurate, colour effect.  The novelty of it was sufficiently alluring for prolific director Maurice Elvey to become managing director of Raycol Ltd.[iv]

Raycol quartered the film frame and exposed alternate images onto the top left and bottom right of a conventional 35mm frame. 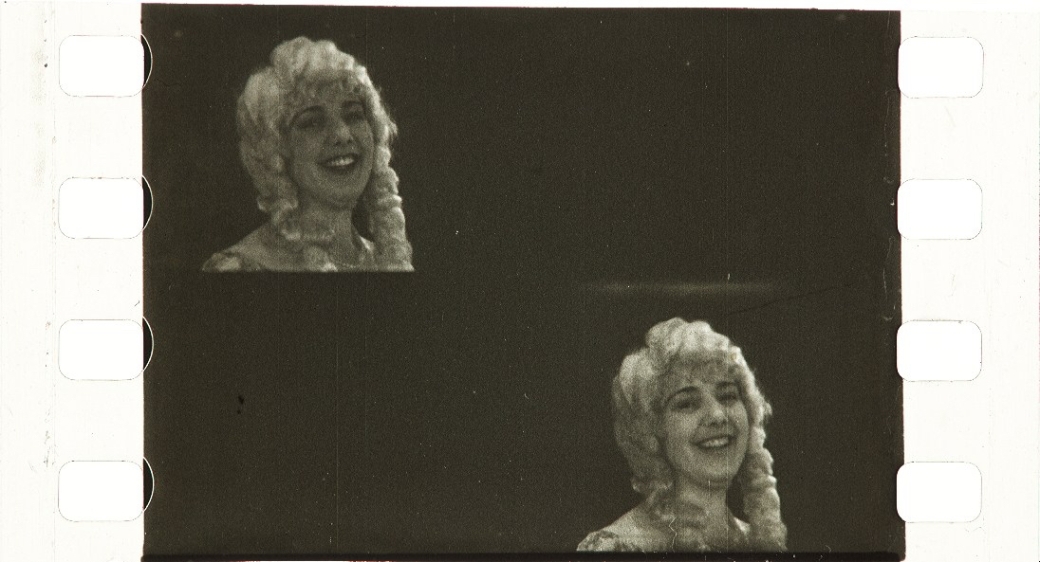 Hitchcock cinematographer Gaetano Ventimiglia claimed that this did not overly affect picture definition, although viewers would in fact be seeing 16mm resolution images.  Worse still for Raycol, in projection two images were superimposed, making it susceptible to ‘the unequal shrinkage of the film, slight variations in thickness or adjustment, and general […] difficulty of keeping the images in perfect registration.’[v] On the positive side, Raycol promised cheap colour for budget-conscious filmmakers.  In a promotional advertisement, Professor F. J. Cheshire, Imperial College emeritus, is said to have examined it and concluded that ‘the Raycol Process, without doubt, marks a notable advance in the theory and practice of colour projection. Since ordinary stock cinematograph material is used throughout, it follows that its cost is of the same order as the usual black and white films.’[vi]

Later that year, writer Elinor Glyn announced an ‘entirely new colour process’ was to be used for her film Knowing Men.[vii] Glyn initially planned to use Raycol, but a breakdown in working relationships saw establishment of the rival Talkicolor.  Glyn took Bernardi with her, although the Raycol brand name and patent remained behind.[viii]  Elvey moved into production with an adaptation of The School for Scandal, explaining his decision on aesthetic grounds ‘Sheridan’s play […] is set in a period ideal for effective colour photography. I believe the British public are in incipient revolt against jazz, lewdness, crime and the back of the stage – which is not the only possible justification of colour on the screen.’[ix]

Raycol had altered by the time of filming, as descriptions in The Sphere periodical demonstrate.[x]  Images of the prints show that, whilst still generating two 16mm exposures, they were now centralized in the 35mm frame.  Curiously, the invention of Raycol is now attributed to one R. W. Alldridge – no mention is made of Bernardi.  This could be oversight, Alldridge perhaps becoming developer on Bernardi’s departure.  Alternatively, holding the established brand-name, Elvey may have applied it to a parallel invention.  However, Bernardi’s defection to Talkicolor and an attempted laboratory theft, hints at the possibility of more willful misattribution.[xi]

Parallel to Scandal, Glyn shot Knowing Men and another film, The Price of Things, but Talkicolor proved expensively ineffective.[xii]  One-upmanship may explain why The Sphere insists Scandal’s Raycol worked, even though it only had a monochrome trade showing   ‘…owing to the fact that the projection of the coloured version involves lens adjustments on projectors’ and no subsequent reviews mention colour photography.[xiii]  This leads to suspicions as to whether Scandal’s colour filming actually worked.  Elvey pushed on regardless and a number of now-lost projects did eventually reach audiences, with the necessary projection equipment making its way into cinemas.[xiv] Perseverance put Raycol on the screen in the end.  Skipper of the Osprey (1934) was promoted as the first Raycol film, but conflicting reviews suggest it had fogged scenes, or conversely was ‘a delight to the eye in the colourful settings.’[xv] Despite all of this effort, Raycol’s cards were marked; three-strip Technicolor was on its way.

Bernardi had also resurfaced in 1933 with Omnicolor, of which a test screening review indicates that it produced colours similar to the additive Technicolor look: ‘The colouring      […] was extraordinarily faithful and lively. […] The grey of the buildings, the red and white of the older trams and the green of the new “monster” [tram] were faithfully reproduced without the hardness usually associated with ordinary dyed films.’[xvi] Omnicolor foundered through Bernardi’s declining fortunes.  In 1936 he resigned from Omnicolor Ltd. and found himself in court.  Unable to convince creditors that he was merely suffering cashflow difficulties, he was declared bankrupt.[xvii]  Such is the fate of those whose inventions fail to catch on.

Over the years, The School for Scandal has been one of the most hotly sought after of lost British films.[xviii]  If a Raycol copy is ever found, it will go a long way towards supporting The Sphere’s claims. Until then, we are merely left with tantalizing accounts for researchers to speculate over. When even the material objects of study – the films themselves – are lost, the mysteries they generate become further compounded.  Ultimately, to see colour in film we need more illumination.

[I] ‘Early Technicolor Discoveries from the BFI’ posted 27 April 2018, viewable with commentary from Bryony Dixon at: https://www.youtube.com/watch?v=a46tD6sjD58

[v] Anon, ‘Raycol Process Demonstrated’ in The Bioscope, 16thOctober 1929, p. vii Note: Although the timeframe of this article indicates the Raycol of Bernardi is being presented, no inventor is named throughout this article.

[ix] Anon, “Elvey’s Coloured School for Scandal” in ‘British Studios To-day’ section, The Bioscope, 2nd April 1930, p.19.  It’s probable that the ‘back of the stage’ dig Elvey is making was aimed at Warner Brother’s On with the Show!, another rival project on its way over from the USA boasting colour photography.  This, and earlier American films in Technicolor such as The Vikings (1928), suggest that the UK companies were really stuck in a bubble of Britishness, fighting to discover a cheaper way to do what had already been achieved elsewhere.

The Hendon and Finchley Times and Guardian

About the Author: Keith Dando is the Course Director for Post Graduate studies at the Northern Film School, Leeds.  He is exploring the ethics of filmmaking in his PhD, and stumbled across Doctor Bernardi and Raycol in the course of his research.  He can be contacted via k.dando3992@student.leedsbeckett.ac.uk